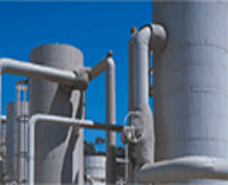 When Hatco Corporation, the largest manufacturer of lubricant grade esters in the world, decided it was time to upgrade their obsolete Bailey SLC boiler control system, they turned to MicroMod Automation for help. In less than four weeks, they had new control strategies running on state-of-the-art equipment tied into their HMI system.

MicroMod’s boiler control sales manager received the call on Tuesday, visited the plant for a presentation on Thursday, and received a purchase order for a complete control system upgrade on two boilers the following week. The original intent was to use MicroMod’s SLC-RetroPAK, and replace each Bailey SLC controller with an equal RetroPAK controller, duplicating the existing configurations.

But on evaluating the programs MicroMod found that the overall control strategy was a near match to the standard, pre-configured packages in the SteamPAK series, and proposed a MeterPAK full metered combustion control package and a DrumPAK drum level control package for each boiler. This was less expensive than replacing each SLC with a new controller, provided a more streamlined architecture, and didn’t require days of engineering to convert the programs. And the boiler-specific installation, startup and operation manuals provided with every SteamPAK package were a definite “plus” to Hatco’s Vice President of Engineering. Instead of the $300 rebate on their Bailey SLC controllers, Hatco opted for spare parts for their new system.

The new SteamPAK controllers are tied directly to Hatco’s existing WonderWare InTouch system (signals from the old Bailey SLCs had to be retransmitted through chart recorders). Installation and startup was provided by Accelerated Process Solutions, a MicroMod authorized system integrator.

Just two weeks after issuing the purchase order, and less than four weeks after making the initial phone call, Hatco had both boilers up and running on the new system with an optimized control strategy and a 2-year hardware warranty.