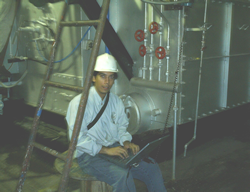 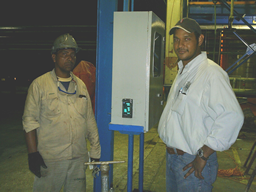 Previously, Lloreda had a completely mechanical control system for their boiler drum level, with rocker arms, counterweights and floats connected to a valve. The valve was actuated by the counterweights which were moved by the floats. But the production processes consume large amounts of steam that cause shrink and swell effect in the boiler drum as they go on- and off-line, and the control system did not respond well to these changes in demand, so several operators were required to manually vary the valve opening to maintain the drum level somewhat stable. As a result, Lloreda had big problems with steam quaity and many boiler trips due to low drum level.

IEC Ingeñiería offered Lloreda two-element drum level control using DrumPAK, part of MicroMod’s SteamPAK series of pre-engineered boiler control packages. The installation of the new system, including transmitters and valves, was completed in two days. When the boiler was brought on line again and the plant required steam, IEC technicians made the final tuning adjustments and the client was extremely happy with the product and IEC’s service.

Engineer Hernandez of IEC stated that “the DrumPAK system we installed at Lloreda was a complete success, and we congratulate (MicroMod) because they have developed a great product.”