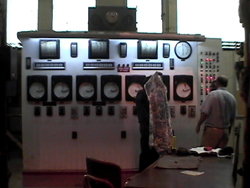 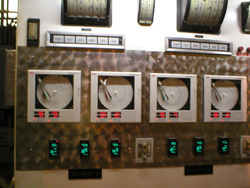 Faced with increasing costs and obsolete controls, Carlisle Finishing (once part of Cone Mills*) decided to upgrade their three 75,000 lb/hr boilers which were still operating on 1956-vintage Bailey pneumatics. The goal of project was to provide the plant with modern, economical controls which would allow for efficient boiler operation, while offering integration capabilities for future emission controls.

Richard Young of Carlisle Finishing developed a ‘Contractor Proposal Request’ and several controls providers were called in to view the facility and have their capabilities evaluated by Carlisle personnel. After a thorough walk-down of the power plant, MicroMod presented a design-build offering which provided for upgrading the boilers one at a time to minimize disruption of operations. Carlisle selected MicroMod as the successful contractor based on our previous experience with similar projects, and the fact that MicroMod was willing to team up with Carlisle technicians to implement the project and help Carlisle develop their in-house expertise. The project completion date was September 30th….just 90 days away.

Working with MicroMod, plant personnel modified the existing control panels to accommodate the new MOD 30ML controllers, along with new recorders and indicators and installed new field hardware (transmitters, RTDs and oxygen analyzers). A new PC-based workstation for operation and data collection was added to the boiler control system, using WonderWare software to maintain compatibility to match the existing production control platform. Recognizing the need for local software support, MicroMod added A&E Engineering of Greer, SC, a local integrator who was already familiar with the data-gathering operation in other parts of the plant, to the project team for graphic design and implementation.

The project was completed on time, Carlisle has recognized a 4% increase in their boiler combustion efficiency, and state emissions testing has been successfully completed. The operators’ learning curve was much shorter because the operating philosophy was familiar and the control functions were basically in the same locations.

The MicroMod system gives Carlisle Finishing the security and integrity of traditional panelboard control architecture with the sophistication, state-of-the-art technology, and trending and data acquisition capability of a high-end system.